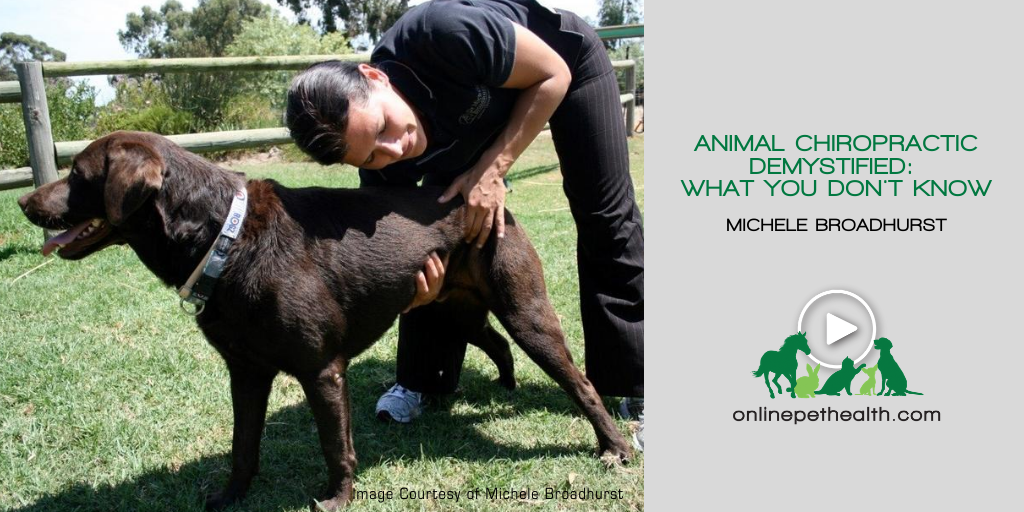 When Ane asked me to write this blog, it filled me with both excitement and trepidation. Excitement because I am hoping to demystify animal chiropractic so that you may understand it better and see its incredible benefits for animals; trepidation because of the wall of skepticism surrounding animal chiropractic and the reputation that chiropractors have amongst our medical and veterinary colleagues.

Let’s look at the Association of Chiropractic College’s definition of chiropractic;

Chiropractic is a healthcare discipline that emphasizes the inherent recuperative power of the body to heal itself without the use of drugs or surgery. The practice of chiropractic focuses on the relationship between structure (primarily the spine) and function (as coordinated by the nervous system) and how that relationship affects the preservation and restoration of health. In addition, Doctors of Chiropractic recognize the value and responsibility of working in cooperation with other health care practitioners when in the best interest of the patient.

As for a chiropractor’s training, it involves four years of undergrad studies, another four or five years of graduate work, and completion of state and national board certifications to become licensed. Not exactly a piece of cake. Chiropractors actually take many of the same core classes as medical doctors. Medical doctors eventually focus on pharmacology, while chiropractors focus more on physiology. Ultimately, it comes down to how you prefer to treat patients.

While conventional medical doctors and many veterinarians tend to rely heavily on medication and surgery, chiropractors promote an alternative treatment option by focusing on neurology. What do I mean by that? Chiropractors work to remove obstacles that prevent the body from functioning at an optimal neurological and structural level. At the end of the day, it all comes down to neurology.

A joint or vertebral subluxation (as opposed to the subluxation known in veterinary terminology) – which effectively means a hypomobile area – creates a biomechanical change that causes nerves to become irritated and interferes with communication between the brain and the rest of the body. This can create an onslaught of symptomatology, including pain, lameness and organic issues, to name a few.

Although modern chiropractic has set aside the notion of spinal subluxations as the cause of disease, chiropractors use spinal and extremity manipulation to send afferent input to specific areas of the brain. We take advantage of the fact that proprioception is one of the main inputs to the brain, forming one of the triumvirate of balance, proprioception, and visual sensory information sources that are used by the brain for primary survival.

A hallmark of neural evolution is that the brain has developed very sophisticated systems to know where it is in space to prevent falls, tripping or becoming unbalanced, which is a leading cause of injury. This requires continuously updated and very accurate maps of both internal and external environments. A great deal of this map localisation and updating occurs through proprioception, because the primary way the brain knows where its body’s parts are is through muscle spindle activity – one of many types of proprioception. Thus, the muscular system has both sensory and motor functions.

Chiropractic really focuses on functional neurology, using the principles of Sherrington’s 1932 Nobel Prize-winning theory known as the central integrated state. This refers to a nerve’s ability to ‘fire’, being the sum of all its activating and inhibiting inputs. It also relies on modern understandings of the importance of accurate visual, vestibular, proprioceptive, and cortical integration in neurodevelopment, neurotrauma and neurodegeneration. Because many nervous system abnormalities have no ablative or organic pathology, they are termed functional lesions. It is the non-ablative basis of functional lesions that can make them amenable to improvement through the unique applications of chiropractic, via chiropractic adjustments and other techniques.

The nervous system was once considered fixed once skeletal maturation had occurred, but now we know it is capable of remarkable change. The brain and nervous system are ‘plastic’ and can be shaped or modified by sensory, motor or cognitive experiences, where temporal- and spatial-summative neural activation can be used to rewire and re-programme the nervous system. Repetitively firing a pair of neurons produces neurotransmitters in the ‘talking’ neuron. This increases receptor expression for that neurotransmitter on the ‘listening’ neuron. The ‘listening’ neuron also sends neurotrophic growth factors back to the ‘talking’ neuron, further promoting the stability of the connection. Nerve cells can also grow new connections to different neurons using synaptogenesis, and can perhaps use neuronal migration to extend to more distant areas. This is how we change biomechanics, learn new skills and are able to create change on a multitude of levels.

Coronado et al. (2012) reported that ‘[r]eductions in pain sensitivity, or hypoalgesia, following SMT [spinal manipulative therapy or the chiropractic adjustment] may be indicative of a mechanism related to the modulation of afferent input or central nervous system processing of pain’ (p. 752). The authors theorised that the observed effect related to modulation of pain primarily at the level of the spinal cord, since (1) these changes were seen within lumbar innervated areas and not cervical innervated areas and (2) the findings were specific to a measure of pain sensitivity (temporal summation of pain), and no other measures of pain sensitivity. This suggested an effect related to the attenuation of dorsal horn excitability and not a generalised change in pain sensitivity’ (Coronado et al., 2012, p. 752). These findings indicate that a chiropractic spinal adjustment affects the dorsal horns at the root levels which are located in the central nervous system.

This is the beginning of the ‘big picture’, since once we identify the mechanism by which we can positively influence the central nervous system, we can then study that process and its effects in much more depth.

One of the main questions asked by Corando et al. (2012) ‘… was whether SMT (chiropractic adjustments) elicits a general response on pain sensitivity or whether the response is specific to the area where SMT is applied. For example, changes in pain sensitivity over the cervical facets following a cervical spine SMT would indicate a local and specific effect, while changes in pain sensitivity in the lumbar facets following a cervical spine SMT would suggest a general effect. We observed a favourable change in increased PPT [pressure pain threshold] when measured at remote anatomical sites and a similar, but non-significant change at local anatomical sites. These findings lend support to a possible general effect of SMT beyond the effect expected at the local region of SMT application (p. 762).

‘A recent model of the mechanisms of manual therapy suggests changes in pain related to SMT result from an interaction of neurophysiological responses related to the peripheral nervous system and the central nervous system at the spinal and supraspinal level’ (Coronado et al., 2012, p. 762).

This demonstrates that the chiropractic adjustment influences the peripheral nervous system and the central nervous system.  ‘Collectively, these studies provide evidence that SMT has an immediate effect on reducing pain sensitivity, most notably at the remote region of stimulus assessment with similar results in clinical and healthy populations’ (Coronado et al., 2012, p. 763).

How does a chiropractic adjustment work? Here is the conclusion

The common misconception about chiropractic is that chiropractors ‘crack’ a joint. That is not accurate or true. Based upon the scientific evidence, chiropractic spinal adjustments stimulate mechanoreceptors and nociceptors of the spinal joints, resulting in afferent discharges and subsequently causing central modulation with an effect at the cord and brain levels. This causes pain reductions and secondary hyperalgesia (pain reduction in remote regions) which appears to be due to central sensitisation of the spinal dorsal horn neurons, while primary hyperalgesia is caused by nociceptor sensitisation.

Chiropractic spinal adjustments also create functional changes in multiple regions of the brain based upon multiple outcome measures that are measurable and reproducible. The areas of the brain affected by chiropractic adjustments affect the following functions: emotions, learning, motivation, memory, consciousness, homeostasis, perception, motor control, self-awareness, cognitive function, voluntary movements, decision making, touch, temperature, pain of the skin-epithelial tissue-skeletal muscles-bones-internal organs and cardiovascular system. This has far-reaching effects, establishing a foundation for understanding how the adjustment works in systemic and autonomic changes, and enabling us to measure and reproduce functional changes within the brain as direct sequalae.

The evidence also reveals that only chiropractic adjustments (high velocity-low amplitude) render these findings, and that mobilisation of joints conclusively do not. In addition, muscle impairment does not automatically improve with symptoms abating, which creates the necessity for both short- and long-term care. This indicates that the deficits in proprioception and motor control, rather than the pain itself, may be the main factors defining the clinical picture and chronicity of various chronic pain conditions.

In any profession, whether doctors, veterinarians, rehabbers, chiropractors, physical therapists, lawyers or CPAs, you get good ones and bad ones. There are always a portion of the population who are cowboys and outliers. It is naïve and inappropriate to label an entire profession as dangerous or incompetent due to personal bias, lack of education or knowledge on your part or an experience with an outlier. Animal chiropractic in educated hands is incredibly beneficial for animals, and just like physical therapy, the same cautions and contraindications hold true and should be considered with every patient.

The practice of rehabilitation, physical therapy, chiropractic, veterinary, myofascial specialists and acupuncture is much more efficient when there is an integrative treatment plan between these sub-specialties. They all have their place and, if performed at the right time for an appropriate condition, can be life changing for the patient. The infighting and turf wars in medicine and veterinary care are childish and show ignorance, and the patient, who is meant to be our priority, loses out on quality care which may compromise an otherwise positive outcome for them. Do your homework, and find your tribe of practitioners who are inclusive rather than exclusive. Take some time to research different professions and you will be pleasantly surprised at how they can complement your own profession.

Join our Business Facebook group and get tips on how to market your practice: