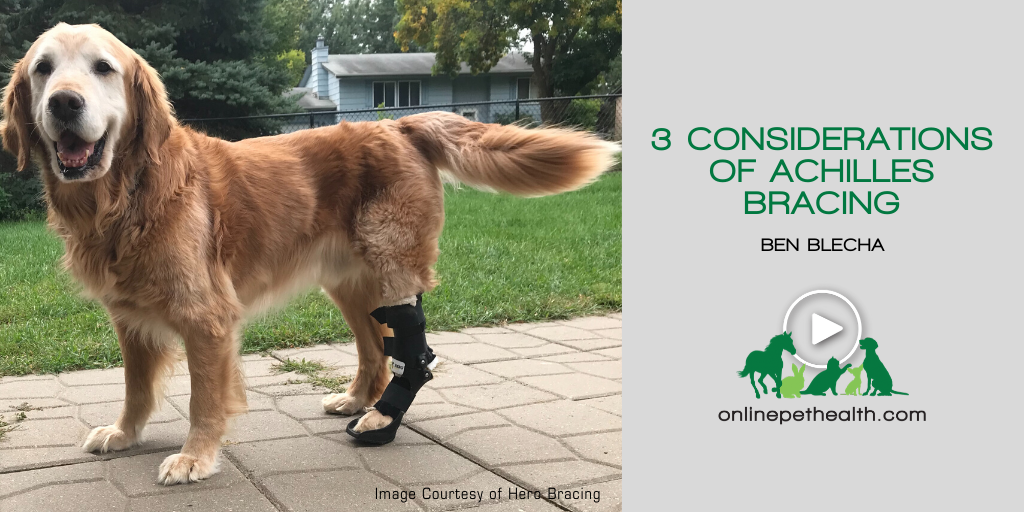 When it comes to Achilles ruptures, rehab and a return to function can be long, intense and sometimes very frustrating. An integral part of the rehabilitation and recovery of an injury to this tendon is the ability to stabilize it with a brace.

Here are a few observations about Achilles rupture bracing in dogs from outside the perspective of Veterinary training. Some or all of these ideas may be wrong, right, or somewhere in between. I am a certified Prosthetist and Orthotist trained to work on the human body, but have been working with other species for the past 15 years.

What motion to allow?

This is a question we can easily overthink and overcomplicate as graduated braces are designed and used in rehabilitation.

I’ve seen people try to adjust x-number degrees every x-number weeks.  The problem is they’re using a brace with so much padding inside it, it allows twice as many degrees of motion in the leg as expected or planned for. Padding should be used sparingly, not as a crutch to address rubbing.

I think this concept of multiple changes in angles comes from adjustable ROM joints that have 8-12 angles in the overall range allowed. Just because you have 12 tools does not mean you have to use all of them on every dog!

From my perspective, there should be a pretty simple progression during rehab:

Sticking to these four steps will allow you to focus on how long each step should last for your particular patient. Each dog heals differently and has different comorbidities.

The next question is, what joint angles to allow?

This aspect gets more complicated.

The natural standing angle of the hock is 135 degrees. But what about German Shepherds? What about Chow Chows? See where I’m going? Each breed has a different natural angulation.

Most surgical protocols say something like, ‘Cast the leg at 165 degrees and the paw straight.’

I think that is overkill. I understand what they are trying to do. Basically, at 165 degrees the leg is straight and they have taken all tension off the rupture. But the dog will now have an excessively long leg.

I think this angle hinders healing. Remember Wolff’s Law? We need some mild tension for the body to initiate healing. I think we should start the brace at 10-15 degrees more extension than the natural standing angle of the individual.

If you utilise a streamlined brace with minimal padding, you can effectively hold the limb in a protective position. This is a big point people miss on ‘graduated’ braces. Make sure the leg is stable and secure inside the brace.

I know padding seems like a good way to help. What I want to say will seem counterintuitive, but padding is often the cause of rubbing. I can vouch for this on my own prosthesis. Padding has a larger coefficient of friction than hard plastic and if there is motion inside the brace, padding will cause rubbing. I have a hard socket on my prosthetic leg and it is ten times more comfortable than any padded one I have used.

Regarding the excessively long leg: This leads to other spinal alignment problems, as well as adding excessive pressure on the other limbs. I know it’s short-term pain for long-term gain, but can’t we see if we can do it better?

How about the paw?

I like to extend the paw in the brace to shorten the limb’s length. I know it adds some stress to the superficial digital tendon, but at the same time we are putting it in a controlled environment where we can minimally utilise the tendon to keep it moving smoothly. This will speed up the back end of the recovery and shorten overall recovery time.

To do this, the paw section needs to be locked. Underneath the back of the paw pad there is a void that allows 10-15 degrees of motion. When the leg is loaded, some tension is put on the tendon, which will aid in preventing it from adhering at the calcaneus as it heals. The solid design of the brace keeps this motion from being catastrophic. This 10-15 degrees of motion from the paw does not put excessive strain on the Achilles because we have already added 10-15 degrees extension to the hock angle.

Should I include the paw? 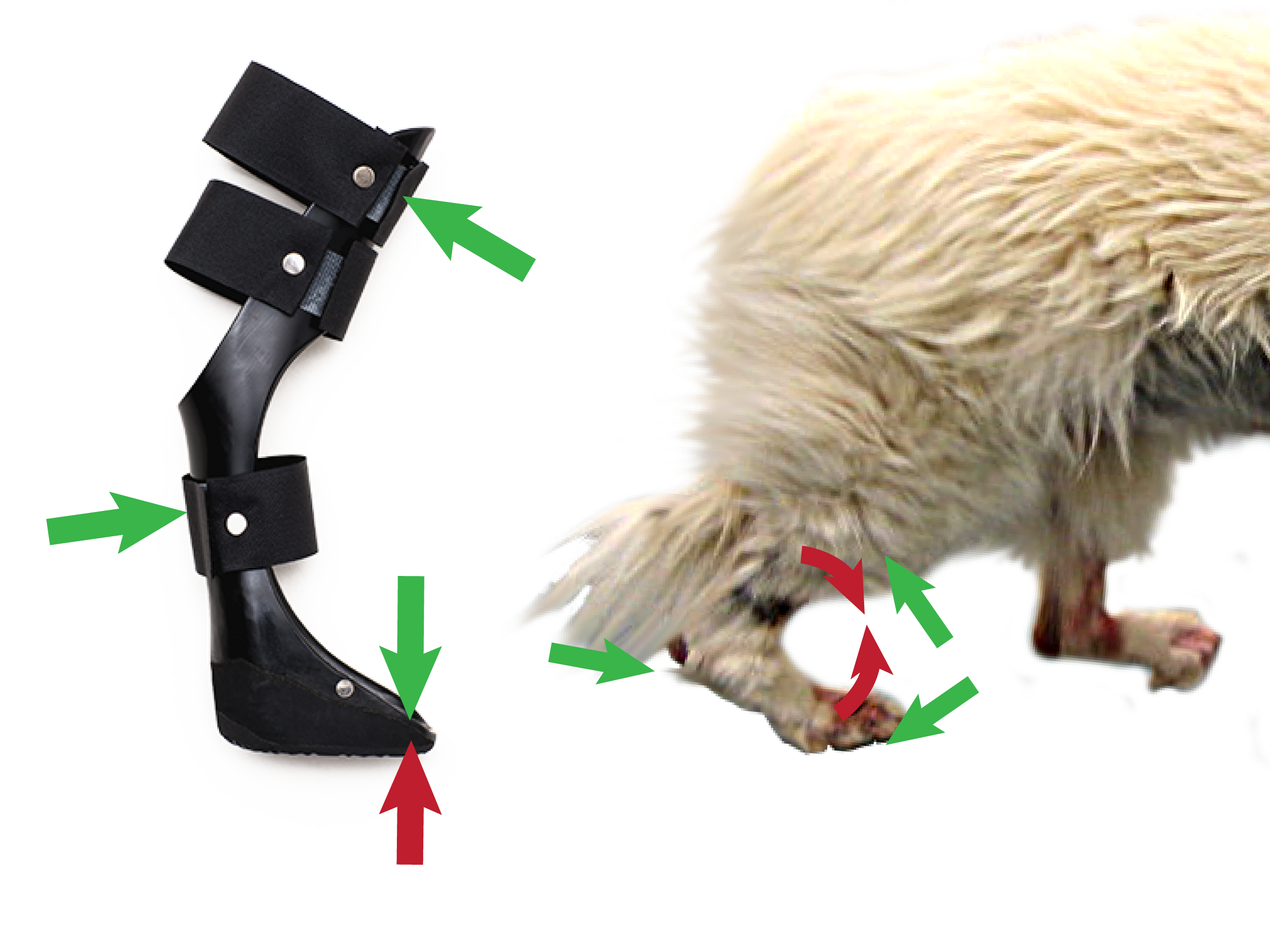 An illustration of the forces acting on the hock joint with a ruptured Achilles, and how the brace will counteract these forces.

There are several reasons to include the paw in the brace design.

When you shorten the length of a brace you increase the amount of force needed to control the joint. More force means more risk of skin breakdown.

In the more powerful breeds, you really aren’t doing anything to protect the tendon if you do not include the paw.

By including the paw, you harness the ground to give you push-back on the tibia. This is the best force to protect from added pressure on the calcaneus.

When you exclude the paw from the brace, the brace will want to slide down. Gravity ensures that. Sliding up and down accounts for 90% of fitting issues.

Most people are scared to include the paw, wanting to allow paw ROM. Remember what we are trying to do; to allow ROM in a controlled environment. We can’t do that without the paw segment.

If you allow room under the paw you can still allow motion and harness the GRF simultaneously.

Some worry about the added length of leg when there is a paw segment. However, If you were going to cast this leg postoperatively in an extended position, that would result in a significantly longer leg than an added paw segment.

Caudal or cranial plastic on the tibia?

We need to leverage the tools we have, and the Earth is a pretty powerful tool that is readily available to us. By harnessing the Ground Reaction Force, we can effectively limit hock flexion.

We can achieve this by wrapping the plastic around the cranial area of the tibia and include the paw in the design of the brace, so that we basically have the Earth pushing back on the tibia with each step the patient takes.

Most early designs of braces wrapped around the back of the leg, as this was just much simpler to fabricate, especially in mass quantities.

To limit flexion of the hock, the caudal braces rely on the straps to push back on the tibia. This works at least for the short term. Have you ever seen a dog play in the mud and muck? We have often encountered this problem, leading to straps wearing out and the biomechanical support of the brace failing.

We use a brace where the plastic wraps around the front of the tibia, harnessing the GRF to reduce flexion of the hock and improving the stability of the brace as well as it’s longevity.

Where do we go from here?

As I said earlier, this piece is written to start a conversation.

My feeling is that all braces should be designed with simplicity. We need to focus on finding the lowest common denominator for our protocols. Complexity overwhelms our patients’ owners and complicates our ability to help the animal.

Please add to this conversation – I want to learn as much as you do!