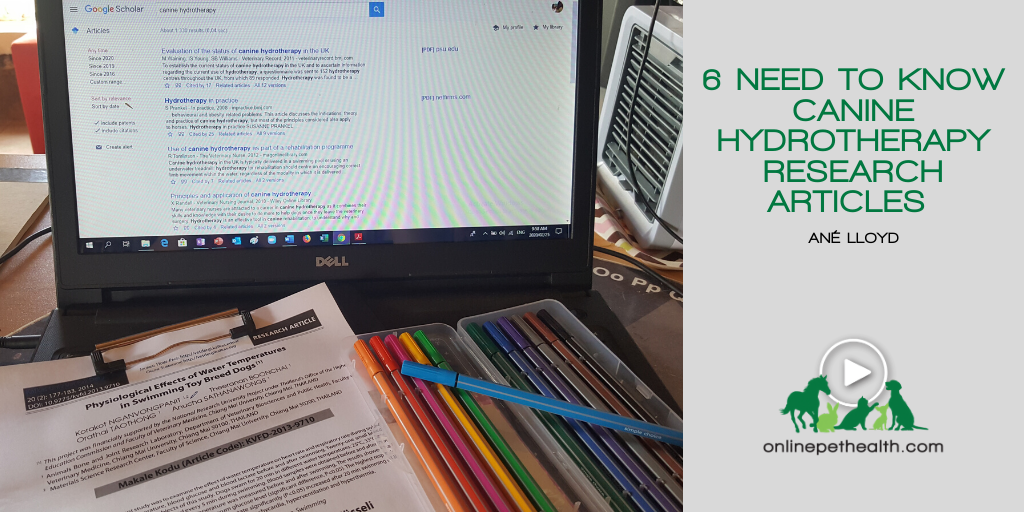 Within the field of Veterinary Rehabilitation we know that our body of good quality research is limited, but growing. When it comes to canine hydrotherapy, the research is even more limited, and growing very slowly. There are few research articles we can cite to the owners of our canine patients, and most convey only the beginning phases of the research. Much needs to be done in each of the areas currently being investigated.

However, we do have some useful research to get us started. Below are five recommended articles that you can reference when chatting to vets and owners about your canine patients, and when making clinical decisions.

This study looked at the effect of water temperature on the heart and respiratory rate during swimming, and changes in rectal temperature, blood glucose and blood lactate before and after swimming in 21 small-breed dogs in water temperatures of 25°, 33° and 37°C. The heart rate and respiratory rate were monitored every five minutes during a 20-min swim, while the other parameters were measured before and after swimming. They found the highest respiratory rate in dogs swimming in 25°C water, and the highest heart rate in dogs swimming in 37°C water. Their recommendation to avoid tachycardia, hyperventilation and hyperthermia is to swim dogs in water that is 33°C.

In each one of these papers, we learn something that has great clinical relevance to us as hydrotherapists. However, all of these studies used very small test groups, statistically limiting the results. And so, while we can take something from each paper, we are sorely in need of more research in the field of canine hydrotherapy.

Let’s do this, guys. If you have a treadmill and an enquiring mind, let’s generate the research that will develop our field!

Join our Business Facebook group and get tips on how to market your practice: