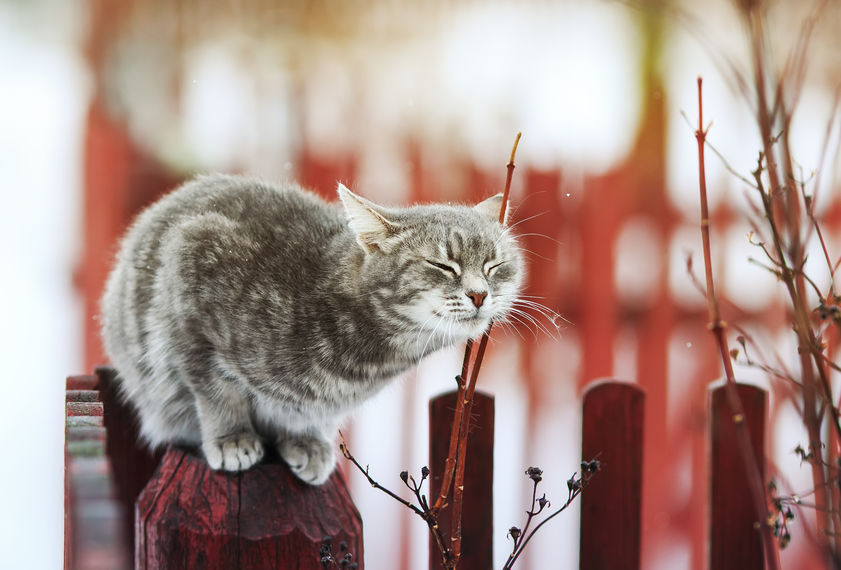 If you are anything like me, when someone mentions using pheromones you nod politely and listen sceptically. I am a sceptic by nature, and it takes a lot to convince me that something is going to work. I was the same way with PEMF and laser – actually any of our modalities  – not to mention homeopathy, aromatherapy and, I cringe to admit, acupuncture. Now look at the science that backs up all these modalities! (OK, admittedly some of them still need some research. But we’ll get there!) I want to know more than how we think it works, I want to know that it works – repeatably, consistently.

So, back to the topic. Cats are prone to stress – it is one of the main reasons they don’t travel and we  see them less in practice than dogs, despite the fact that they far outnumber dogs as pets. One of the most recommended strategies for targeting their stress and making them more comfortable in our practices is the use of pheromones.

Of course, I have to ask all the questions …

Liberles (2014) describes pheromones as chemical compounds produced by an individual animal that have a predictable physiological and behavioural effect on other animals of the same species. They form a part of social behaviour and signalling, playing a role in reproduction, aggression, feeding, social coordination and loads of other social behaviours.

Cats secrete five pheromones from glands in their chin, lips, vibrissae area and cheeks (Mills, 2005). These are known as feline facial pheromones. They will typically secrete F3 facial pheromone when they rub against things – most often edges, doorways, etc. It is thought that this pheromone helps the cat to identify his or her territory.

Pheromones are released from the body into the environment during certain activities, such as when cats scratch objects, or rub their faces and bodies against objects. When another animal becomes aware of the pheromones on an object, they will typically show a change in physiology and behaviour, such as showing increased interest (Mills, 2005).

How do cats smell pheromones?

The first sign of the presence of pheromones can be visual; the evidence of scratch marks, for example. Then the pheromones are smelt in the normal way through the nasal chambers and olfactory bulbs. The upper lip will then retract and the mouth partially open in flehmen, exposing the vomeronasal organ in the roof of the mouth, and allowing the pheromone to be aspirated.

The vomeronasal organ is innervated by three nerves that link it to the limbic system, where emotions, mood and memories are regulated (Hewson, 2014).

Do synthetically produced pheromones have an anti-anxiety effect in cats?

This is where it gets interesting!

Griffiths et al (2000) conducted a study that suggested that cats that are exposed to FFP (feline facial pheromone) had an increased food intake when hospitalized. There are, however, many criticisms of this study, including the way in which cats were divided into the control and exposure groups, and the inclusion of a carrier in one group, which seemed to have a greater impact on the cats’ behaviour than the FFP itself. Few people now accept the results of this study.

Kronen et al (2006) looked at whether FFP calms cats and reduces struggling before a veterinary procedure, with a blinded design using a placebo. Cats exposed to FFP did appear calmer, from their head position and position in the cage, than those exposed to the placebo, but there was no difference in the amount of struggling during the procedure. Again, there are many criticisms of the methodology in this study, and the results are not widely accepted as relevant.

Frank et al (2010) undertook a systemic review of the literature available, and concluded that there was insufficient evidence of the effectiveness of FFP for calming cats, and a lack of support for the notion that they reduce stress during hospitalization.

A quick search of the internet reveals many blogs, articles and opinions that agree with Frank et al (2010) – the evidence does not support the use of FFP to calm cats in clinic.

That being said, many people use pheromones in practice, and report benefits. So at this point I think it comes down to personal preference – use them if you think they help!

So what can you do to help your kitty-cat patients relax in your practice?

There are a few things you can encourage owners to do to help their cat arrive in a calmer, more prepared state:

In clinic, there are a few things you can do to allow the cat to feel comfortable and safe:

The next challenge is to get cat owners to understand the relevance and importance of veterinary and rehab care for their pets!

Thank you to Janice Huntingford for the above tips on making their experience in practice a bit easier, as shared in the webinar of Onlinepethealth Small Animal Members 2019 Cat Series, titled, Pain in Cats, sponsored by Assisi Animal Health. Check out the Membership page for more info on becomming a member and gain access to this four part webinar series that is accredited for 4 RACE points.