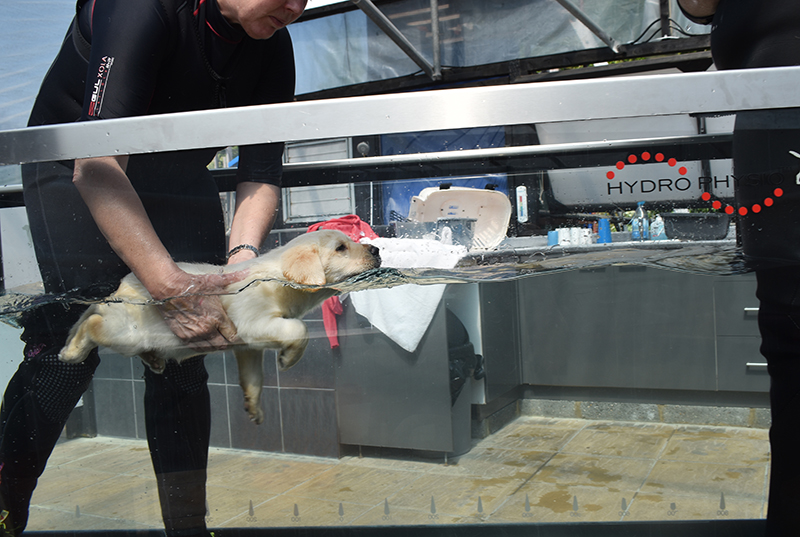 Thank you to Angela Griffiths and Greyfriars for their valuable input on swimmers syndrome and these included images.

Swimmers syndrome is a poorly understood, poorly characterized disease that affects puppies and kittens. It is usually noticed 15 to 21 days after birth, when the difference between an affected puppy or kitten and its litter mates becomes apparent. It will usually affect one animal in a litter, but has been reported to affect a whole litter in some cases (Dumon, 2005).

Most of us will rarely see swimmers syndrome; it tends to be a once- or twice-a-career event. Nonetheless, it is a good idea to have at least an idea of what to expect, and how to treat this unusual condition. Angela Griffiths and the team at Greyfriars have treated two puppies with swimmers syndrome recently, and share their story in this month’s Hydro Case Study. After watching it, I decided to get a better understanding of the condition – hence this blog.

Swimmers puppies or kittens seem to have a delayed physical movement capacity (Fossum, 2007) that usually affects the hind limbs and occasionally also the thoracic limbs (Dumon, 2005). They will present with a continuous abduction of the hip joint and hyperextension of the stifle and hock joint. When the forelimbs are affected they will present with abduction of the shoulders, extension of the elbow and flexion of the carpus. The pups or kittens will have an inability to support their weight, and the limbs will move in a lateral, cyclical pattern that looks like swimming.

The condition seems most often present in chondrodystrophic or brachiocephalic breeds, although not always – as we see in the Greyfriars Case Study. In cats, the condition has been reported in a Devon Rex, as well as in mixed breeds

What can go wrong?

The continual compression of the chest and abdomen, together with the position of the limbs, can lead to the development of a flat thorax, skin lesions, milk regurgitation, cyanosis, dyspnea and aspiration pneumonia (Dumon, 2005).

The condition can also present with a number of concurrent conditions, including thoracic dorsal deviation, dorsoventral compression and sternal malformation, medial patellar luxation, malformation of the articulations of the long bones, and an innocent systolic heart murmur (Linde-Forsberg, 2010).

So what causes swimmers syndrome?

At this point there are only theories, and they remain difficult to prove. Some of these theories include hereditary factors, environmental factors, an excessive amount of protein in the mother’s diet, maternal metabolic disorders, musculoskeletal development problems, obesity, inadequate or delayed myelination of peripheral motor neurons or functional alterations in neuromuscular synapses (Linde-Forsberg, 2010).

Cerum creatine kinase levels in the bloodwork of some puppies have been shown to be significantly higher than in healthy puppies, and can give an additional clue into the effect of swimmers syndrome on the muscles. Since the muscle metabolism is affected, muscle hypoplasia or atrophy may result. This is not especially useful for a diagnosis of the disease, but can give an indication of the efficacy of treatment and the prognosis (Korakot, 2012).

We expect puppies and kittens to start walking 10 to 15 days after birth. For this reason, we may see clinical signs as early as the first week after birth, but usually around the second week. A diagnosis is generally made from a history, clinical signs and radiographs. This condition usually affects only one puppy or kitten in a litter, but can affect multiple or the entire litter.

Although a treatment protocol hasn’t been developed, it is agreed that the sooner treatment starts, the better. Traditionally, hobbles or bandages have been used to hold the limbs in adduction at the hip joint with a promotion of flexion in the tarsal joint. Together with daily physical rehabilitation – including exercise, heat, hydrotherapy and PROM, a return to normal function can be seen is as little as seven days (Cardilli, 2013).

Without guidelines in terms of treatment, and with a risk associated with the use of hobbles or bandages over a period of time, developing a treatment plan can be daunting. In this month’s Hydro case study on the members’ platform, Angela Griffiths and her team follow the progress of two swimmers syndrome puppies from beginning to end, describing the treatment protocols and techniques used for these pups, and how they regained normal function. 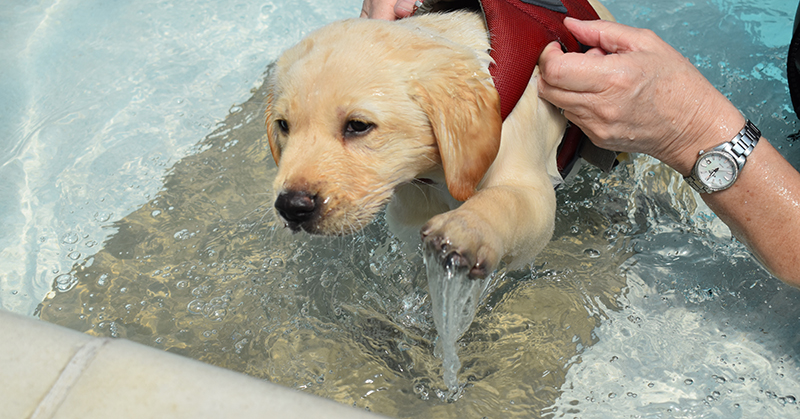